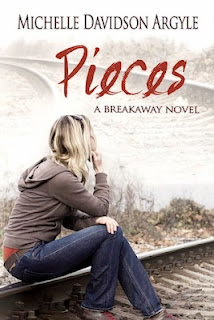 Two years after watching her kidnappers go to prison, Naomi Jensen is still in love with one of them. Jesse will be released in a few years, and Naomi knows college is the perfect distraction while she waits. But when her new friend Finn makes her question what is right and what is wrong, she begins to wonder if Jesse is the one for her … until she discovers he's out on parole. Naomi must sort through her confusion to figure out where love and freedom truly lie—in Finn, who has no connections to her past, or Jesse, who has just asked her to run away with him.
Pieces is a companion to The Breakaway and can be read independently, if desired.

My Review:
Pieces blew me away.  And did not end how I expected it to.  I LOVE where the book went, the journey Naomi takes to fix things of the past, and where she goes and the choices she makes so she has a good future.  If nothing else, this book teaches that no matter what has happened to you, or what may happen to you, you can always fix it, you can be strong and stand up for your self.
And most importantly, it is never too late.

There are a few scenes that are more adult. If asked to rate this book, I would say PG-13
While Pieces as written to be read after The Breakaway, or as a stand-alone, I definitely recommend reading The Breakaway first.

The story is unique, captivating, filled with moments of laughing, crying, and times when you just want to step inside the book and give Naomi a hug.  Michelle is an incredible author with a true talent for writing.

When she answered the knock on her door, Naomi found Finn standing on her front
porch with a cup of iced tea and a Styrofoam box she guessed contained a slice of almond
cake.
“I’m sure you could order this somewhere else,” he said with a lopsided smile as he
held them out to her, “but nobody makes the combo quite like Java, and you said you
wanted to order some when you got back.”
She couldn’t keep the smile off her face as her mouth started to water. “Finn, I invited
you over for dinner. That didn’t mean you had to bring something.”
He rolled his eyes. “No, I invited myself over for dinner against your protests, so that
does mean I had to bring something. Now, enjoy.” He pushed the cup and box at her. She
took both. “And here’s a straw.”
She balanced it on top of the cup and stepped aside to let him in.
“What can I help with?” he asked, rubbing his hands together as he entered the
kitchen. “You clearly said this isn’t a date, so I’m going to help.”
Naomi was still standing by the door. She pushed it closed with her foot and followed
Finn into the kitchen. He was wearing the ripped jeans again. In fact, she was sure they
were the exact same pair he always wore. She smiled at his black Jimi Hendrix shirt.
“It’s pretty much done—just spaghetti. Nothing special.”
He walked to the oven and peeked inside. She had put in a loaf of French bread
earlier. “Did you make that?” he asked, looking over his shoulder.
“I haven’t mastered baking yet,” she said, shrugging. “I bought the loaf at the store,
but I made a garlic spread to put in the middle. It’s warming up in there.”
“Still, it looks great. And the sauce?” He lifted the lid off the stockpot and peeked
inside. “Did you make this from scratch?”
Chuckling, Naomi walked to the counter and set down her almond cake and iced tea.
“Yeah, I did. Why are you so fascinated?”
He returned the lid on the pot and turned around. “I don’t know. My mom doesn’t
cook much—she never cooked when I was growing up—so, yeah, this all smells
amazing. I’m used to eating at Java or boiling ramen noodles.” He put on a wicked smile.
“I knew it was a good idea to invite myself over. Maybe I’ll do it more often.”
Naomi grabbed the straw on top of her iced tea and began tearing off the end of the
wrapper. “Finn, about us hanging out, I called you because I’m … well, I have a problem
and I don’t think anyone will understand except you. I don’t think my housemate Becca
would understand what I’ve done since she’s never dropped below a 4.0 GPA. She tends
to judge people who slack off.” She finished unwrapping the straw and shoved it through
the hole on the cup lid. “And my mom will kill me when she finds out. I’m not sure what
I’m going to do and I ….” She picked up the tea and took a long gulp. The heavenly taste
kept her tears at bay for the moment. There was no way she was going to cry in front of
Finn.
He waited for her to finish. She took another sip of the drink and continued.

“And I have things I need to tell you because you seem to understand me on a level
not many people do. Well, two people. You and Jesse.”
Finn nodded.
“Jesse is my boyfriend.”
“I thought as much.”
She looked down at her feet and noticed her nail polish was almost worn off. She
always painted her toenails red—the same red Evelyn had used on her nails. When she
looked back up at Finn, he was peeking into the uncovered pot on the back burner.
“Noodles,” he said, smiling as steam rose up around his face.
Naomi rushed forward. “I need to check them.” She snatched a spaghetti spoon and
leaned past Finn so she could reach the pot. He didn’t move as she twirled the spoon and
caught some noodles.
“Want me to get out of the way?” he asked, grinning down at her.
With the spoon still poised over the pot, she looked up at him and realized he was
close enough for her elbow to brush against him. He smelled like almond cake. She asked
herself for the hundredth time why she had let him come over for dinner.
“No, I’m good,” she said, backing away with the spoon raised in the air. She looked
at the dangling noodles dripping hot water onto the floor. The ends were beginning to
turn white, which meant they were done. She lifted the spoon above her mouth and took
a bite. “Perfect,” she mumbled, chewing. As soon as she noticed Finn watching her with
a huge grin on his face, she turned away. “Can you drain the pot in the sink? There’s a
colander already in there.”
“Sure.”
Fumbling her way around the kitchen, she let Finn help her set the table and dish
up the food. When they were both seated, she put her hands on her knees and took a
deep breath. No matter what happened, she wouldn’t screw up. She wasn’t going to hide
anymore. She was going to tell Finn the truth, trusting he would understand and be there
for her when nobody else could be. She hoped confiding in him would show him how
highly she thought of him. His eyes were on her. He unfolded his napkin and set it on his
lap. She let out her breath and picked up her fork. “Let’s eat.”

Stalk the author, get the book: