Release Day Blitz ~ HOME IS WHERE YOU ARE BY TESSA MARIE

HOME IS WHERE YOU ARE BY TESSA MARIE

FIND IT ON AMAZON! 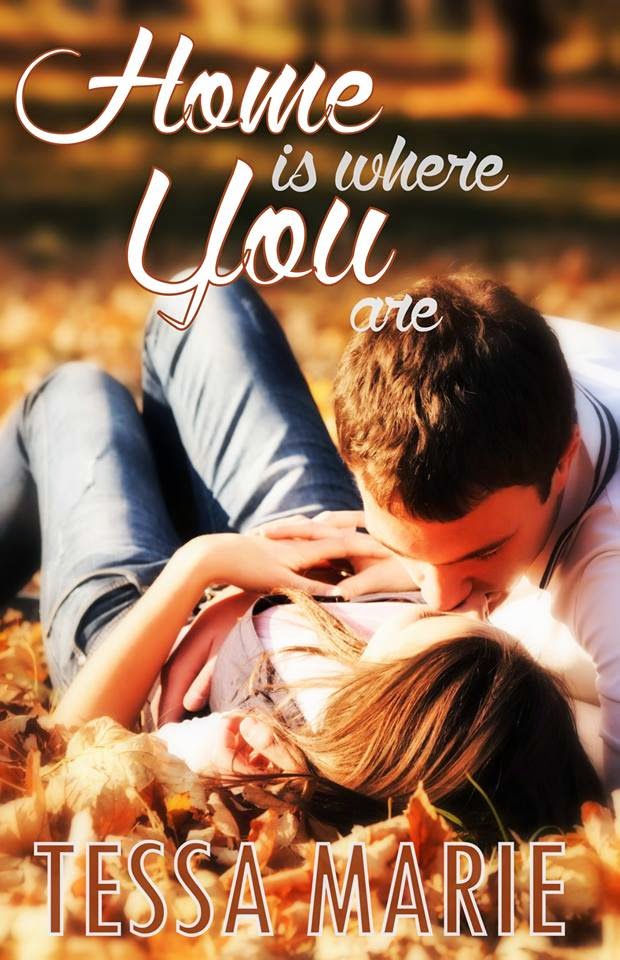 Anna’s life reads like a check list.
Straight A’s (Check)
Editor of the school paper (Check)
Volunteering time at the local soup kitchen (Check)
Ivy League (So close she can taste it)
Falling in love with a homeless boy (Not on the list)

Dean has a plan too. Survive. After being subjected to his foster father’s violent attacks, Dean made the hard choice to leave. Now he lives on the streets doing everything he can to get by, refusing to let people help him. But when he meets Anna, he realizes not everyone is out to hurt him.

Slowly, Anna and Dean let each other in, blending their two worlds into one. But when a series of events brings Dean’s world into perspective, he pushes Anna away. Not willing to accept the line that divides them, Anna sets out to bring Dean back to her. Her determination and faith in their future puts her on the tracks of danger, and he is the only one who can save her.

ADD IT TO YOUR GOODREADS:  http://bit.ly/HomeIsGR 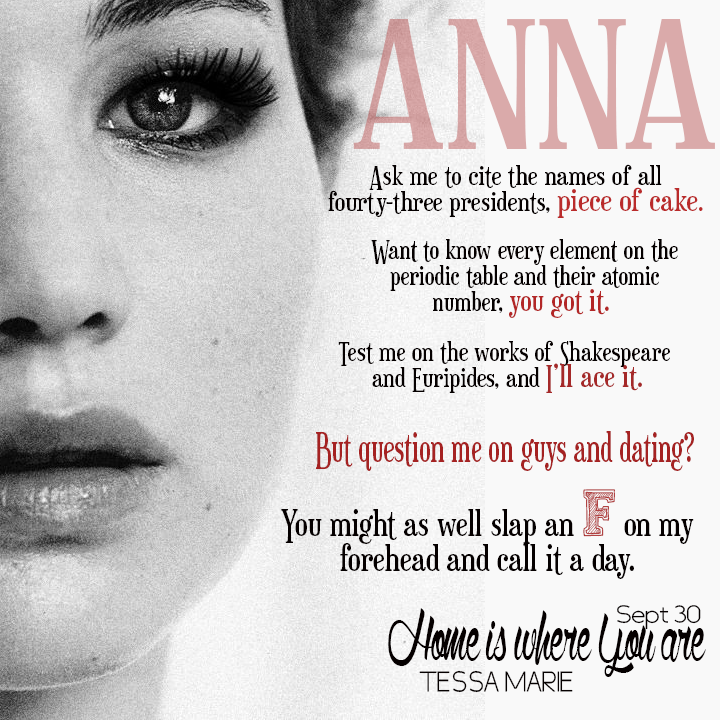 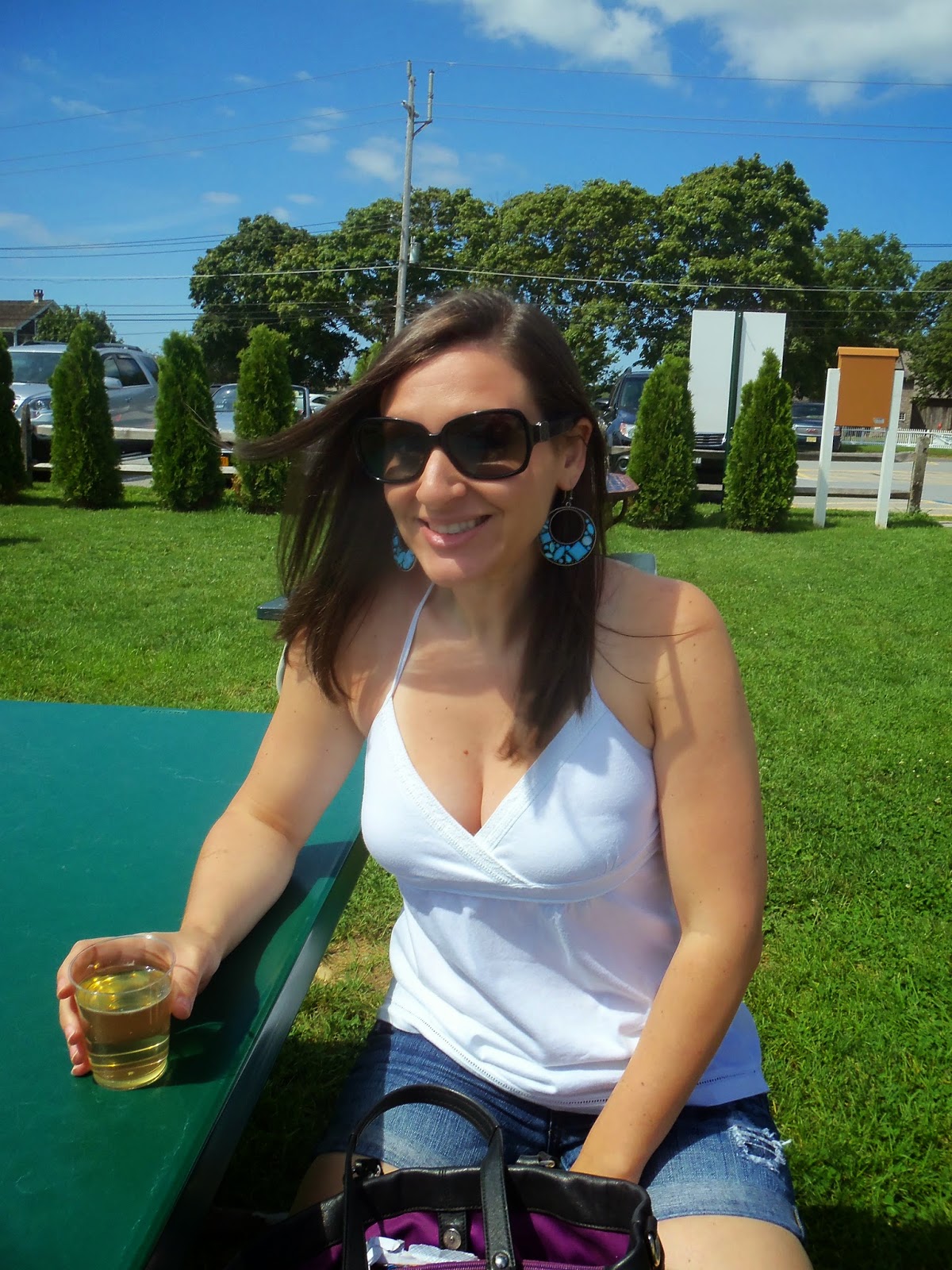 Tessa Marie lives in the same town she grew up in on Long Island, NY with her long time boyfriend and their fish. Under her real name, Theresa Paolo, she released her debut novel (NEVER) AGAIN, a NA romance, in Fall 2013 with Berkley (Penguin) and (ONCE) AGAIN released this summer. She is also the coauthor of the Amazon bestseller KING SIZED BEDS AND HAPPY TRAILS and BEACH SIDE BEDS AND SANDY PATHS, a YA contemporary series. She has a hard time accepting the fact she’s nearing thirty, and uses her characters to relive the best and worst years of her life. She put her love of writing on hold while she received her Bachelor’s Degree in Marketing from Dowling College. When she’s not writing, she’s behind a camera, reading, or can be found on Twitter, Pinterest and Facebook.
Posted by Konstanz Silverbow at 1:23 PM 2 comments:

Sydney lives her nightmares every night. While other teenagers are dreaming of boys or traveling to exotic places, she must run a staircase with no beginning or no end, or a terrible debt will never be paid.
Just before her seventeenth birthday, the dreams change. She is no longer alone.
But her nightmares don’t end when she wakes up. Her stepmother and stepsisters threaten to ruin everything she holds dear. She must protect the secret that both she and her father have magic or they will use it to their advantage.
As Sydney learns to control her magic, what seemed impossible before—escaping her stepmother and those ever-present stairs—is now at her fingertips. When she learns the ultimate plan of her evil captor, Sydney must stop her at all costs, or she will forever lose her soul.

Sign up HERE!
Posted by Konstanz Silverbow at 12:00 AM No comments:

When nerdy Rich Witz unwittingly becomes a Paladin, a white knight, in training, he is thrust into a world where flunking a test can change the course of history and a mysterious bully is playing for keeps with his life.
Rich’s grandmother leaves him with one thing before disappearing for good: a white chess pawn with his initials engraved on it. The pawn marks him as the next in an ancient line of white knights. He must prove himself in a life or death contest against his Nemesis, a dark knight in training, all while dealing with math homework and English projects.  With the ghost of an ancestor for his guide, he has seven days to complete four tasks of valor before his Nemesis does, or join his guide in the realm of the dead.
As Rich rushes to complete the tasks, he realizes the chilling truth: his Nemesis is masquerading as someone at school and will stop at nothing to make him fail. As the tasks grow ever harder, the other knights reveal to him that his failure will break a centuries-old chain and bring the Paladin order to ruin. If he fails, the dark knights win the right to control the fate of the world, a world without hope or the possibility of a new dawn.  So this is one exam Rich has to ace, with no curve and no extra credit.

Only Half Alive's ONE YEAR ANNIVERSARY!! 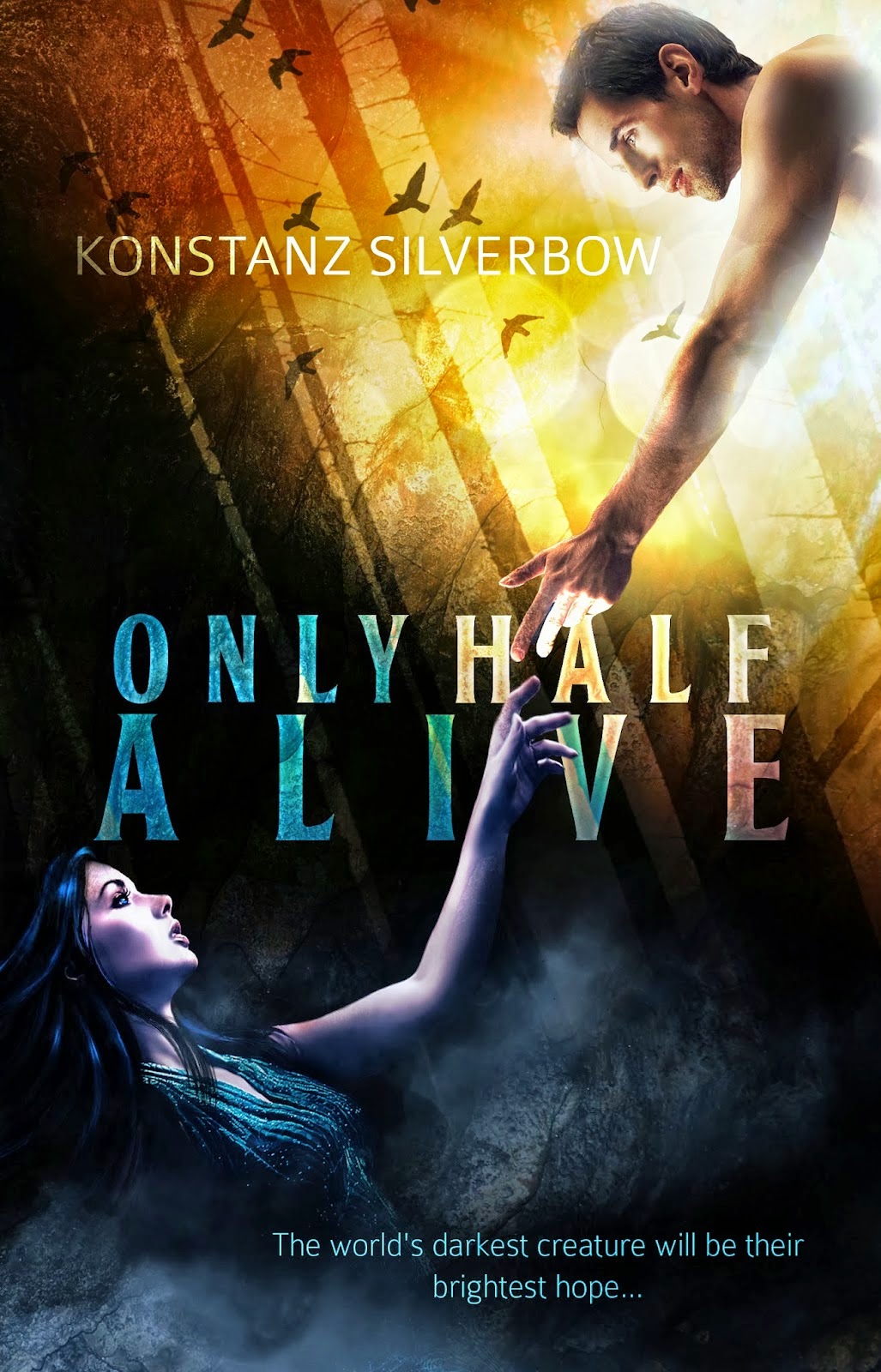 It's Only Half Alive's ONE YEAR ANNIVERSARY!!

Get your paperback copy on Etsy (HERE) and use the coupon code "ONEYEAR" for 30% off!

Get your kindle copy on Amazon (HERE) while it's on sale for 99cents!

Celebrate with me tonight at the party (HERE) and enter to win tons of prizes! -

THANK YOU for your continued and constant support. I wouldn't be here without you! *HUGS* <3

Unlovable is now an audiobook!

Unlovable is now an audiobook!! If you click here you can get the audiobook for free with a 30 day free trial of Audible on Amazon!! You can't beat free!!
Along with the release of the audiobook, I've redesigned the covers of the first two books in the Port Fare series. ( I'm designing covers now. Click here and check them out!) To celebrate the new look, I am giving away paperback copies of the entire series.
Here is the new cover for Unlovable. I didn't change it to much because I really loved the original one. (Thank you, Paul Beeley), but another author came out with almost the exact same cover, including the coloring :'(
I kept the girl on the swing because she fits Maggie's story perfectly, though I did add flowers to the swing. The rest has been changed completely. I love the blues and pinks, and I've always wanted a moon on the cover. I also added Maggie's trailer in the background!

Here is the eBook cover: 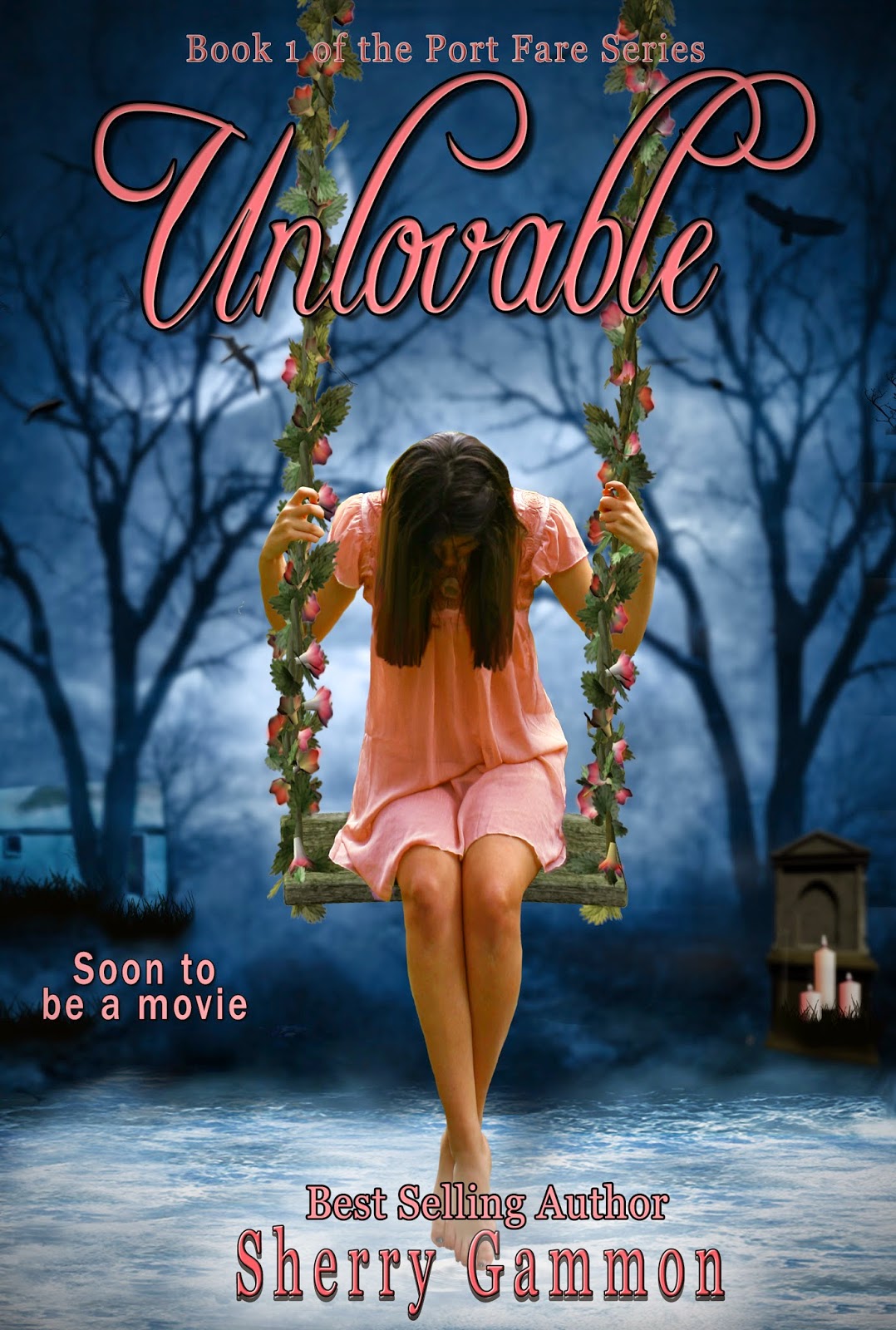 And this is the Paperback 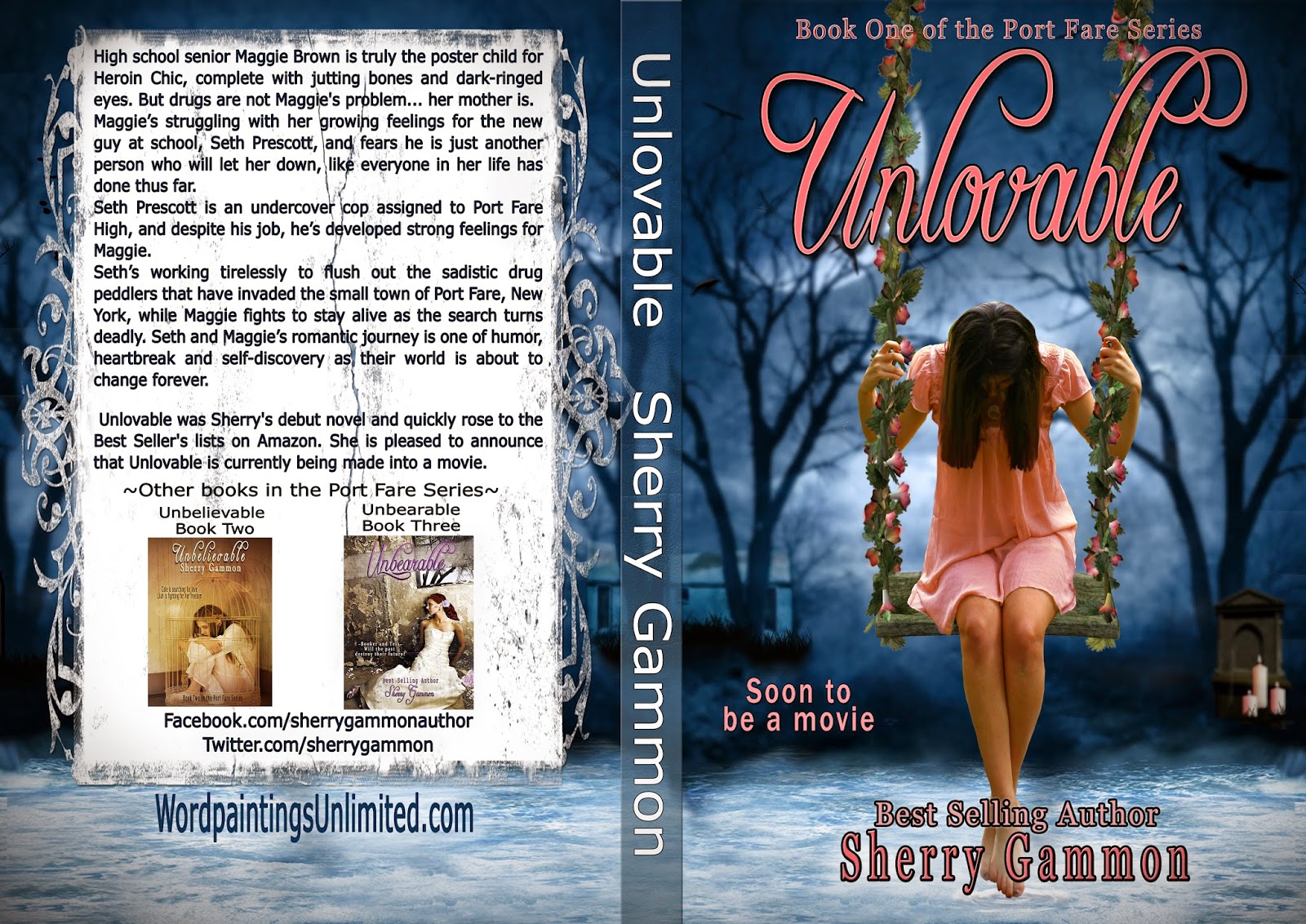 This is the audio book cover. 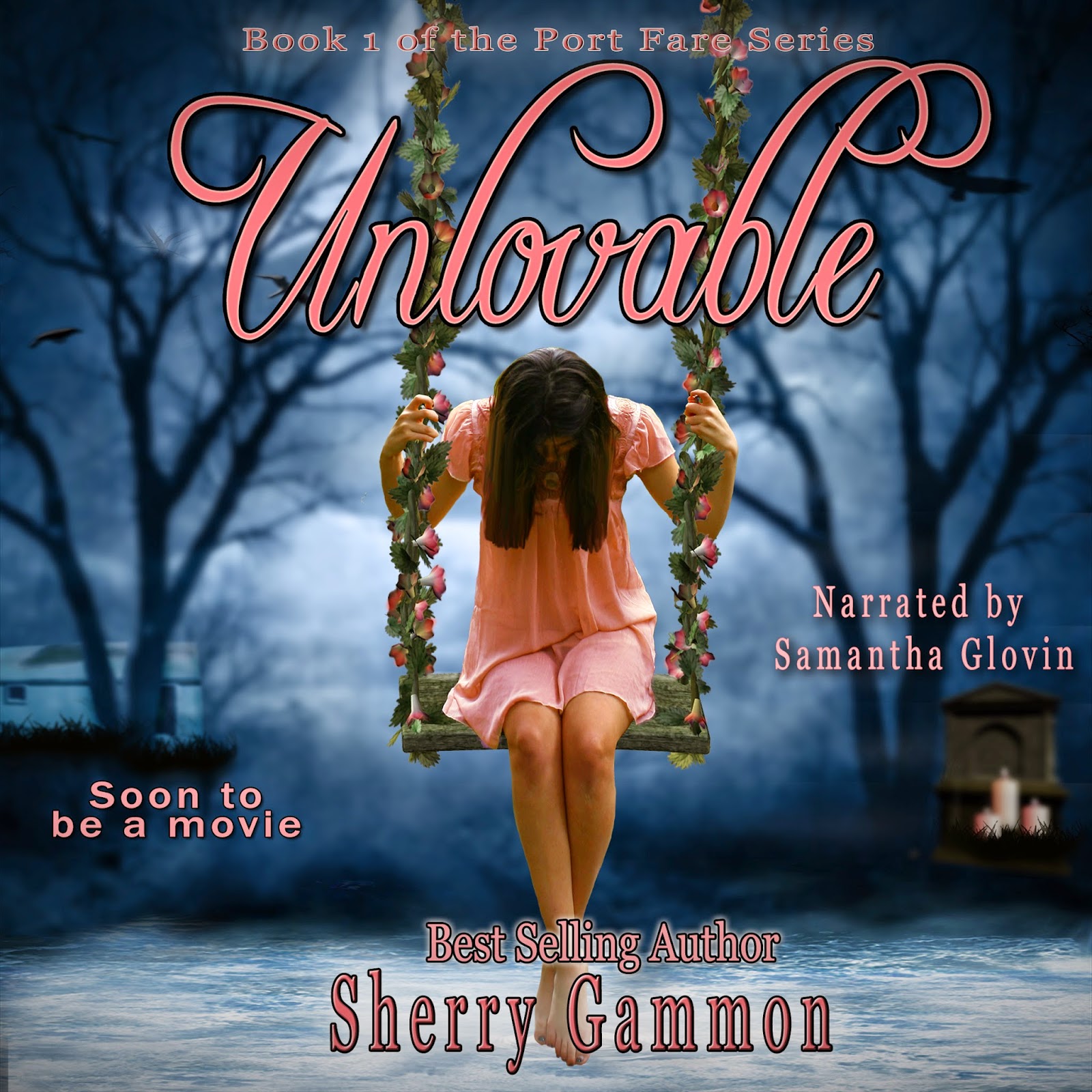 This is the new cover for Unbelievable! It's a real change. I feel this cover fits the story so much better. Lilah feels trapped by her domineering father and his demands. She desperately wants to break free...can't tell you anymore or I'll spoil the story I feel this new cover portrays Lilah and what she is going through in a much stronger way, and it seems to fit in better with the other covers. While I loved the old cover, and had a huge say in its design, (Thank you again, Paul) it seemed out of place with book one & three's covers. This one holds the same "feel," if you will.
Here is the Ebook cover: 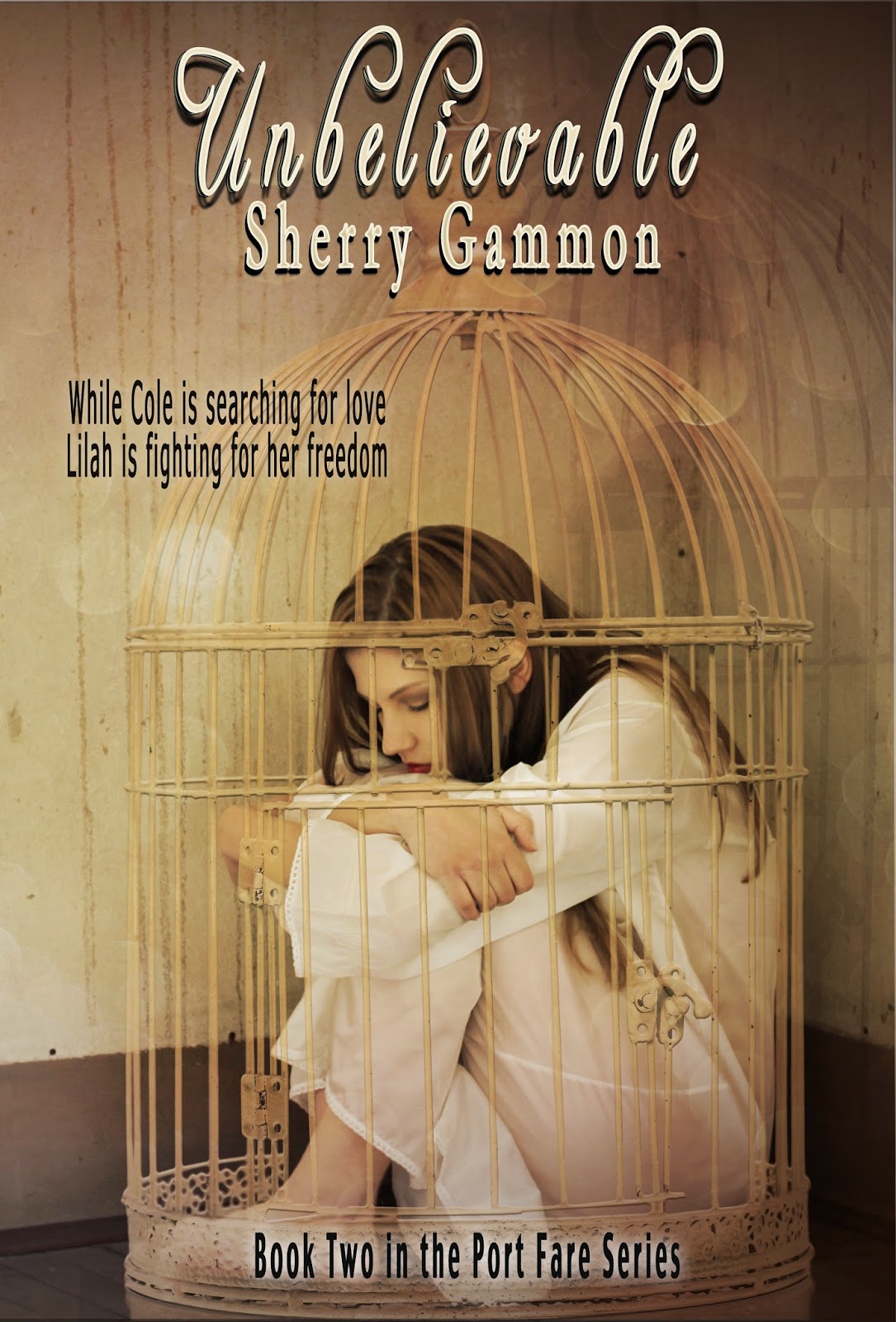 And this is the paperback 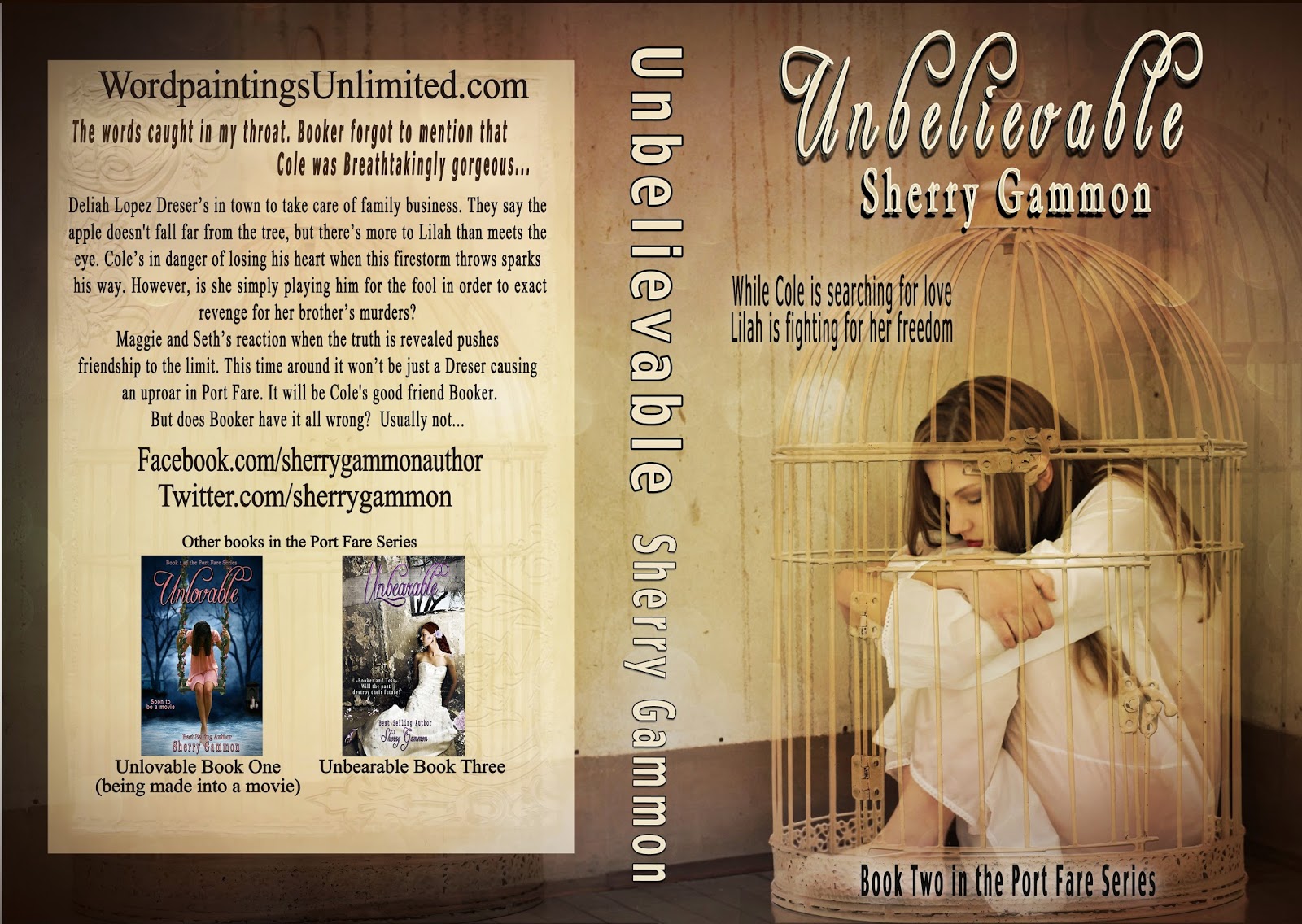 Unbearable's cover didn't really change, only the back was updated. 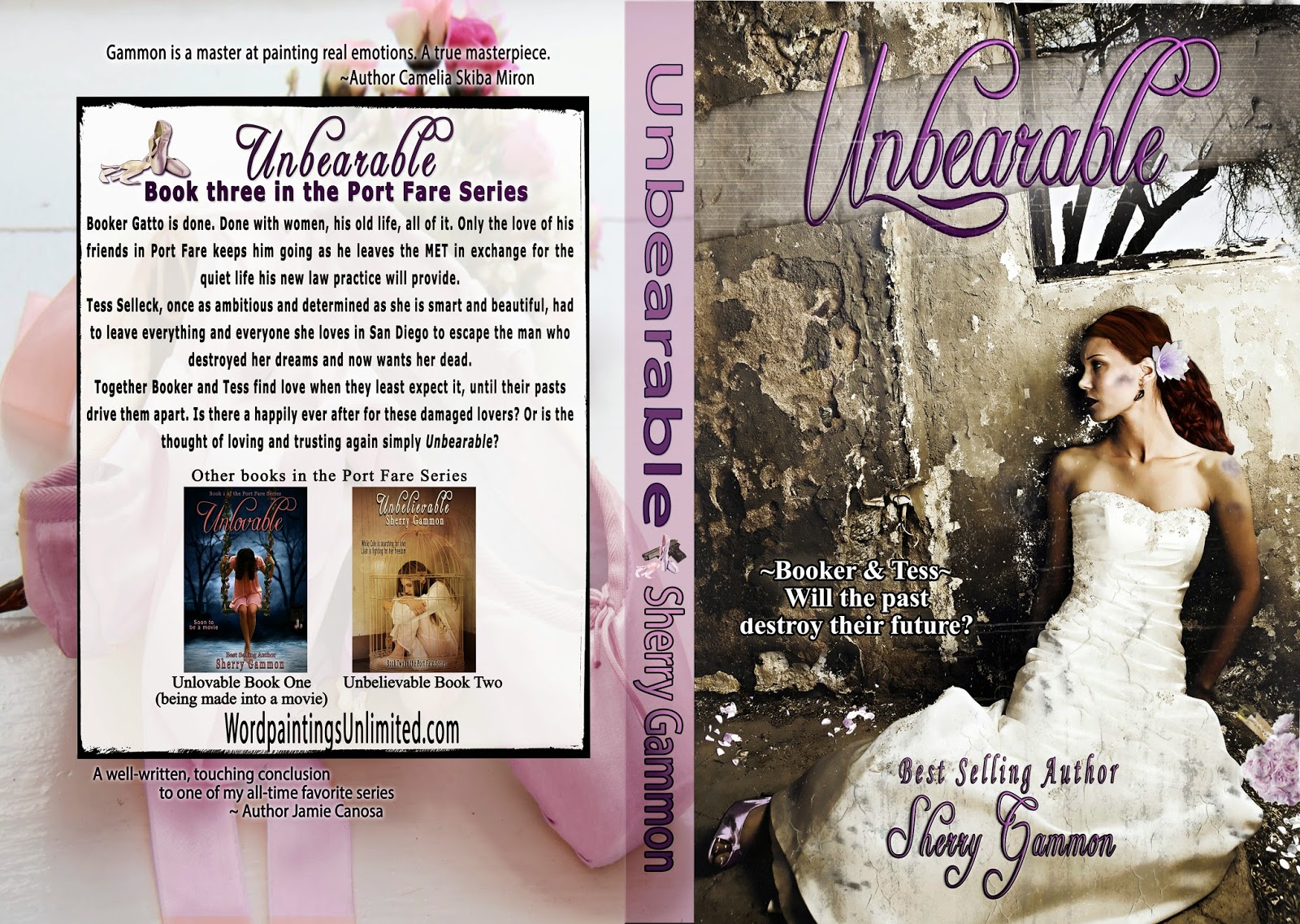 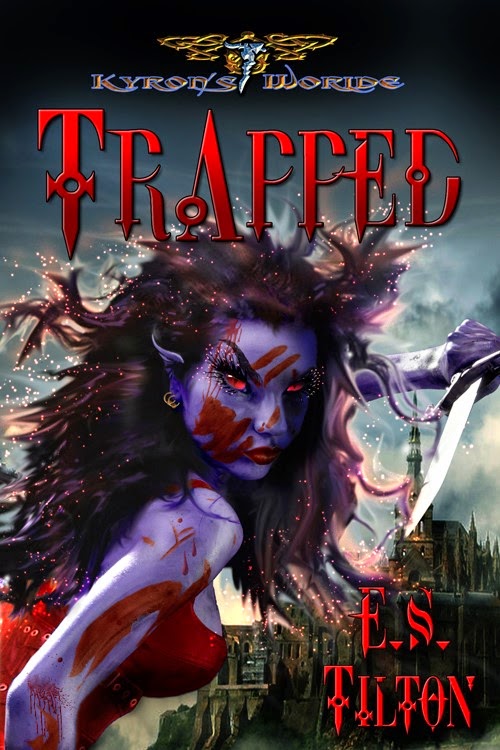 ~ About the book ~
When the Red Pelican Assassin's Guild offered Sarenka a job she thought she was getting a safe cottage to live in while she spied on philandering innkeepers.  She had no idea it would lead to wanted posters flapping in the ocean breeze and eating scraps from dog bowls. Branded a murderess, her only chance for survival is to escape Burmtin.
Without friends or allies she's lonely, desperate. Yet she dare not reveal her true face for fear of what the slavers, mercenaries, pirates, and petty thieves will do. Caught within a broiling cloud of deception, where psychics and ghosts fight to control the twists of fate, Sarenka finds in the end that only one thing matters: Can the same illusions that doom her, save her?
“Enter a world of decadent opulence and primitive tribalism. Unleash your imagination and ride the tide of fantasy with shape-shifters and quicksilver demons. Lose yourself in a labyrinthine world, Kyron’s Worlde.”
This is a stand alone book in the Kyron's World saga. Other books in the series include Foretold: Betrayal and Foretold: Seduction's Blade. 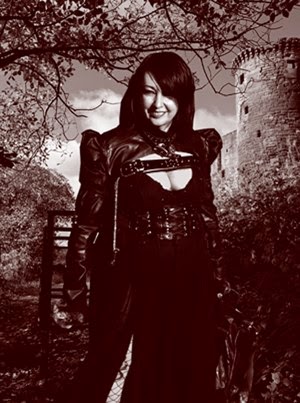 Avid gardener and costume enthusiast, ES Tilton spends her time petting cats, loving on family, playing with computers, and writing fantasy fiction.  Despite a recent move to the country, she claims there is never enough time to follow her dreams, to whatever strange land they may lead.  She is the proud owner of two cats, one lover, three children, and more plants than she can take care of.  Her other interests include dancing, herbal healing, psychic phenomena, and, of course, pleasure.

Posted by Konstanz Silverbow at 12:01 AM 2 comments:

Only Half Alive & Missing Royal ON SALE! 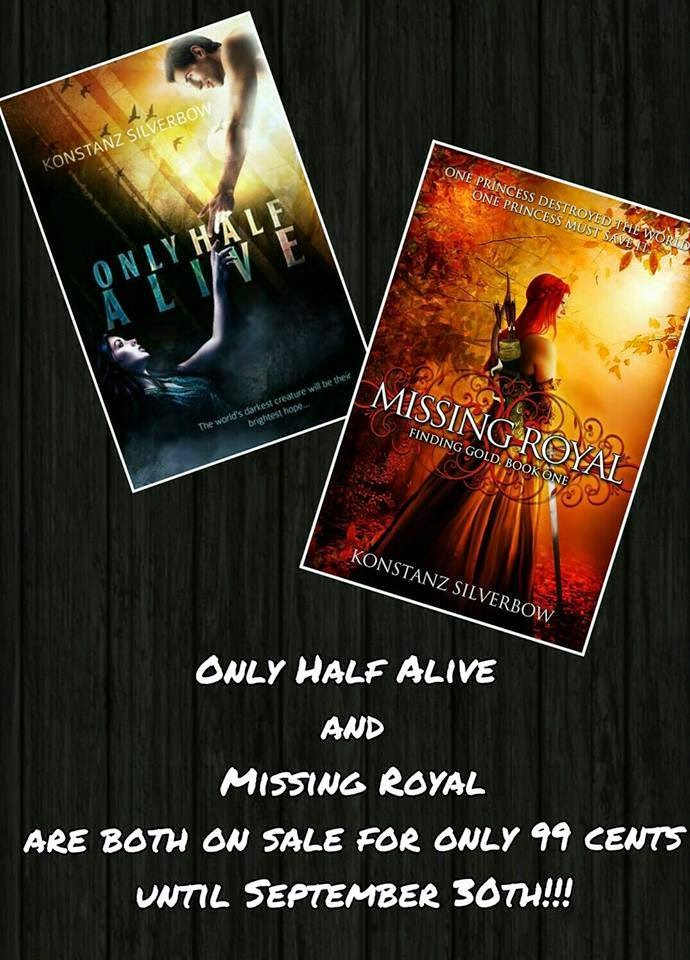 You're Invited: Only Half Alive by Konstanz Silverbow ~ One Year Anniversary 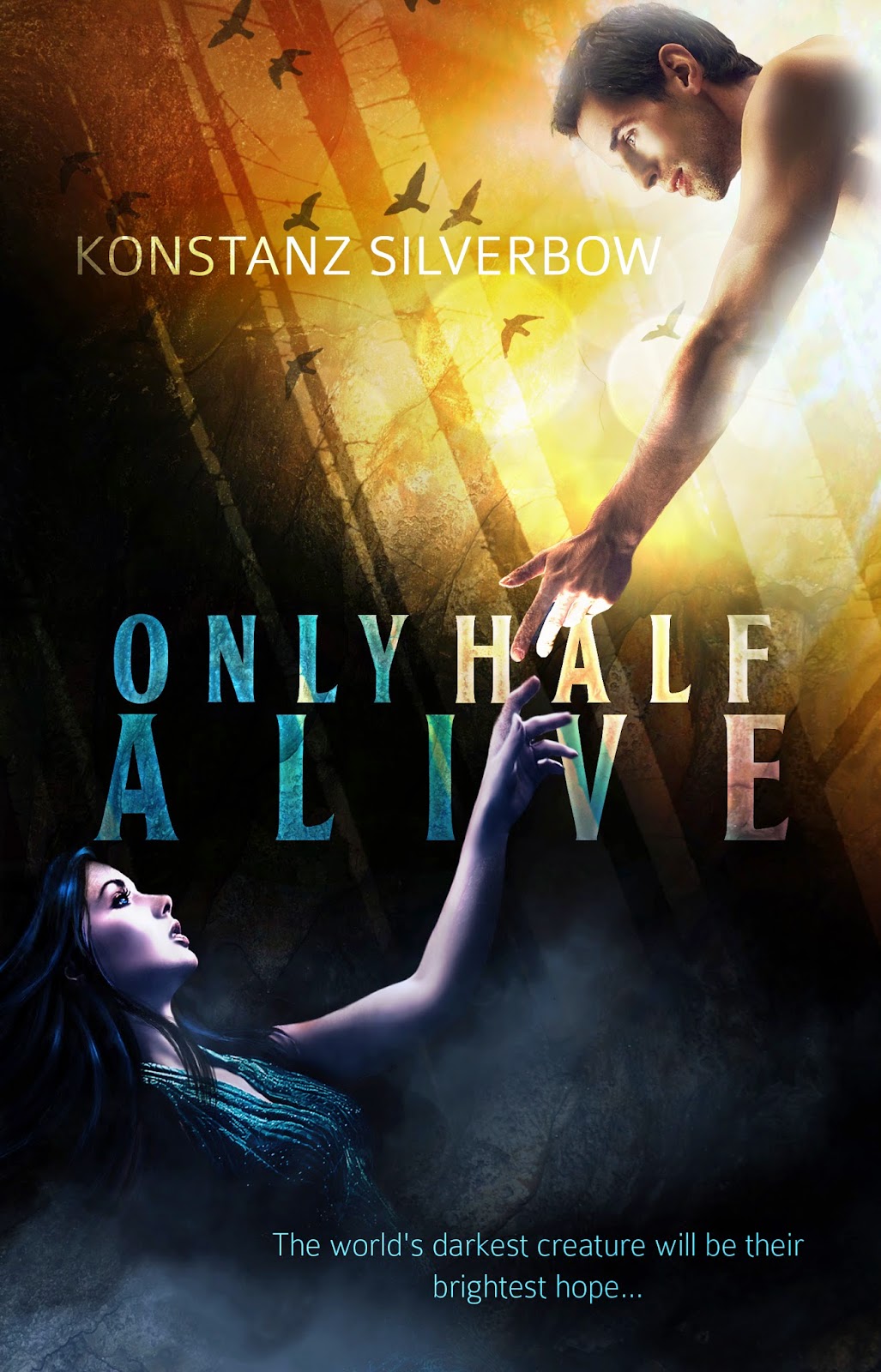 The world's darkest creature will be their brightest hope!
While darkness haunts her, she craves the light. Christina is a demon, but she doesn't want to be. She is willing to sacrifice everything to change it. Only one person stands in her way, and he will stop at nothing to keep her the way she is.
The greatest battle of light vs dark threatens every living creature, a battle that could destroy all. And the demon in love will only have one chance to save everyone.

~ Attend the One Year Anniversary Party ~ Donate To The Party ~

A strange white whelp found by The Gateway.
The winds tell her that destruction is coming.
That the horde can no longer remain in their home;
But no one will listen.

Rose has always been different.
Being mocked, abused, and shunned;
That's the story of her life.

The gods of her people whisper a dire warning to her.
An unknown enemy seeks The Diamond Isles.
She knows they must leave, to stay means their death.
She even knows where they must go.
She has seen their "xosha" in dreams and visions.

Will she be able to convince the Oni to leave?
Or will the things the winds spoke of come to pass?

Abomination: Legend of Xosha (The Ways of the Pack Book 1) $2.99 Amazon

I didn’t ask to be what I am.
I didn’t ask to be created.
Everyday my very blood wars against itself.
They don’t understand.
They didn’t save me.
They only turned me into an Abomination.
Born a wolf, created to be a monster. Katalina DarkLaw, daughter of the DarkLaw pack alpha, finds herself losing more and more of who she is with every day that passes. Leaving behind a trail of murder and blood, she flees from her pack, right into the arms of Silver Von'Dyre, perpetual bachelor and alpha of Von'Dyre pack.
Will his faith in her be enough to save her? Or, will she become the monster she fears she already is?

S.Cu'Anam Policar was born in Brooklyn, NY, but now lives in Washington State. The Mother of three she makes time to write, usually late at night.
An avid reader, she not only writes, but helps promote other authors with reviews of their books and sharing their special offers.

She is Pagan but respects all religions and believes everyone should celebrate their similarities and not worry about their differences.

When she has the time, she enjoys playing video games, horseback riding, singing, and writing things short stories.

As the founder of Wolf Paw Publications, she believes quality work shouldn’t cost an author an arm and leg. And while her prices are competitive, the quality of her work shines through.

She absolutely loves to make new friends so don't be afraid to come by and say hi on facebook!

a Rafflecopter giveaway
Posted by Konstanz Silverbow at 12:00 AM 5 comments: