Epic: Fourteen Books Of Fantasy For a limited time only! The freshest voices in fantasy bring you fifteen New York Times, USA Today, and Amazon bestselling authors. With fourteen stories and over one million words of captivating fiction, this epic fantasy set will keep you entranced. Delve into worlds where adventurers discover forgotten lands of wonder and fight ancient evil. Worlds where dragons soar, where heroes and heroines wield sword and magic to answer adventure's call. Get one of the largest bundles of page-turning epic fantasy today…before it’s gone!

Terah Edun - Blades Of Magic
As an unstoppable war breaks out, a young girl enlists to find out the secrets that everyone is trying to hide.
Daniel Arenson - A Legacy of Light
War rages in Requiem, an ancient kingdom whose people can grow wings, breathe fire, and rise as dragons.
Megg Jensen - Anathema
A young slave girl discovers a world of magic she never knew existed and must face her enemies as prophecy unravels.
Jeff Gunzel - Land Of Shadows
A young blacksmith, born into a simple life, watches helplessly as the world he knew crumbles before his eyes.
C. Greenwood - Mistress of Masks
When an ancient evil stirs in Earth Realm, a group of unlikely heroes must find a way to stop the wave of darkness that is devouring their land.
Dima Zales & Anna Zaires - The Sorcery Code
Blaise's magical creation is not an object of sorcery, but rather a beautiful woman who's unlike anything their world has ever seen.
Annie Bellet - Witch Hunt
A cursed elven archer and her ragtag group of adventuring friends battle witches to stop a deadly plague and save a small village.
David Adams - Ren Of Atikala
Humanity is found in the inhuman when a "monster" is forced out of her home and into the world of elves, humans, and dragons.
Joseph Lallo - Jade
A little girl, selected as a sacrifice to end a mighty dragon's reign of terror, instead finds both the protection and the family she so badly needs.
K.J. Colt - Concealed Power
Adenine has been quarantined for being the last carrier of a plague that killed thousands, but when trouble strikes, she is forced to leave her sanctuary and enter a world full of secrets, enemies, and plots.
Lindsay Buroker - Encrypted
After being kidnapped, linguist and code-cracker Tikaya Komitopis must work with her people's greatest enemy to stop an ancient evil that threatens the entire world.
Mande Matthews - Bonded
Two children--one a born leader and the other a born servant--are bonded across worlds as Soul Warriors, but they must discover the secrets of their past if they hope to overcome the darkness that threatens their future.
Brian Anderson - Starfinder
Lee Starfinder embarks on his first adventure with a sword at his side and confidence in his heart, but he will soon discover that the perils of the world are far stranger than he had ever imagined.
Ed Robertson - White Tree
A young man is obsessed with mastering death magic, but his studies make him the key to resisting a powerful god--as well as the intended prey of the god's dark acolytes.

Book Blast Giveaway $50 Amazon Gift Card or Paypal Cash Ends 12/22/14 Open only to those who can legally enter, receive and use an Amazon.com Gift Code or Paypal Cash. Winning Entry will be verified prior to prize being awarded. No purchase necessary. You must be 18 or older to enter or have your parent enter for you. The winner will be chosen by rafflecopter and announced here as well as emailed and will have 48 hours to respond or a new winner will be chosen. This giveaway is in no way associated with Facebook, Twitter, Rafflecopter or any other entity unless otherwise specified. The number of eligible entries received determines the odds of winning. Giveaway was organized by Kathy from I Am A Reader and sponsored by the author. VOID WHERE PROHIBITED BY LAW.  a Rafflecopter giveaway
Posted by Konstanz Silverbow at 12:01 AM No comments:

Only Half Alive and Missing Royal ON SALE! 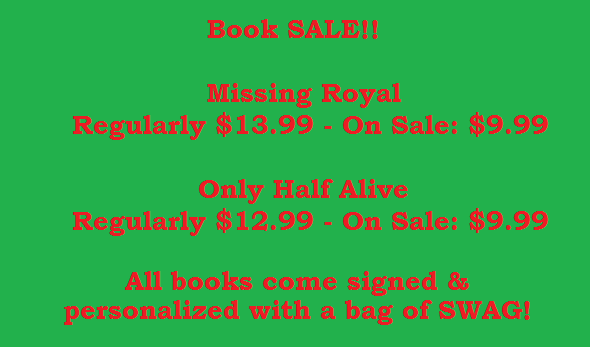 Only Half Alive and Missing Royal are ON SALE! Oh, did I mention there's also a surprise in FIVE copies of each book? Five lucky readers are gonna get a gift certificate to receive a free signed, personalized copy of The Enchanted Rose when it releases February 10th 2015! Get your books now!

Posted by Konstanz Silverbow at 4:01 PM No comments: