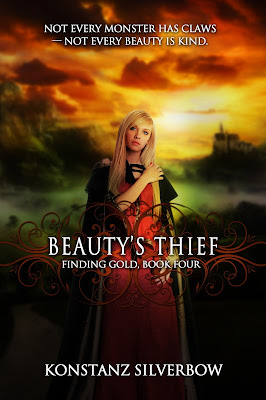 Not every monster has claws—not every beauty is kind.

Born a princess, raised to be queen, but living as a servant, Avalyn never realized she would pay the price for her father’s mistakes. Now Avalyn is living in a castle not her own, a slave to an evil witch who wants revenge on the man who betrayed her trust and ruined her.

For Avalyn, her real punishment has yet to begin.

She will be cursed to work for the witch for the next one hundred years unless true love can find its way into the castle and into her heart.

Now the princess’s freedom rests in the hands of a lowly thief who cares only for himself.

How to write 40k words in a single day! 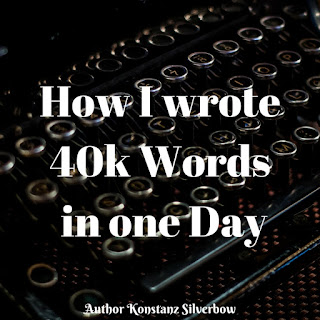 I started writing in 2006 at the age of 13. My first book took seven years to write. The story it started as is not what it ended up becoming. The title changed, the setting changed, the plot changed, and basically it morphed from a single thought into a full world containing a series of stories (now known as the Finding Gold Series).

Upon finishing that final version I submitted the book to a publisher already 99% sure it would be rejected, but knowing if I didn't do something with it  I would never move on.

With notebooks filled with ideas, I moved onto something new; the book now published as Only Half Alive. It took me 13 days to write.

What changed? Well, first of all, I didn't really care what that second book turned into. I just wanted to have fun. I let the story take me where it wanted to go, no questions asked. Whereas the first book was my baby! My precious first story that had to be perfect!

After seven years of writing, I was already good at typing fast. Whether I'm sprinting online or at a writer's retreat, my typing speed is constantly questioned. "How can you write so fast?", "Did you really write that much?", "It's not even possible." But the truth of the matter is, YES, I can write that fast, I do write that much, and yes, it's possible.

After my first book was published I was introduced to the world of sprinting. No, authors are not meeting up to go for a jog. Writing sprints! And I quickly learned I was a bit competitive. I finally found a sport I could win at.

The sprint group I joined welcomed me and I found a new way to write books faster. Most sprints were 30 minutes to an hour long. This worked for the first little while. But the more I did it, the faster I learned that I would only write for a short period of time and then get distracted the rest of my writing time.

First, one thing you have to know is I'm a bit odd. Some people joke that I have OCD. I don't  know if that's true or not but I like things to have order. So joining sprints (that most often started at random times and ended just the same) was a bit stressful for me.

The sprinting made a huge difference. But that's not the sole reason I can write as fast as I do. And after being asked "How do you write so fast?" so many times, I decided to put together an actual list of ways I accomplish it.

Through these things, I managed to write just over 40,000 words in a single day.

I hope this is helpful!
As I discover more secrets to writing faster I will share them!
Feel free to post questions in the comments!

Posted by Konstanz Silverbow at 12:35 AM 9 comments:

Thanks to this fabulous group on bloggers and authors for joining me to bring you this awesome giveaway. Enter for your chance to win $250 in Paypal Cash or a $250 Amazon Gift Card.

$250 in Paypal Cash or a $250 Amazon.com eGift Card Ends 7/26/17 Open only to those who can legally enter, receive and use money sent via Paypal or gift codes via Amazon.com. Winning Entry will be verified prior to prize being awarded. No purchase necessary. You must be 18 or older to enter or have your parent enter for you. The winner will be chosen by rafflecopter and announced here as well as emailed and will have 48 hours to respond or a new winner will be chosen. This giveaway is in no way associated with Facebook, Twitter, Rafflecopter or any other entity unless otherwise specified. The number of eligible entries received determines the odds of winning. Giveaway was organized by Kathy from I Am A Reader and sponsored by the authors, bloggers and publishers on the sponsor list. VOID WHERE PROHIBITED BY LAW.   a Rafflecopter giveaway
Posted by Konstanz Silverbow at 12:00 AM No comments: