Win the coolest book prize pack ever and help a great cause! 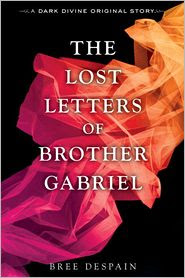 Story Description:Brother Gabriel, Daniel’s mentor and an ancient Urbat, plays an important role in The Lost Saintas well as the upcoming conclusion to the Dark Divine trilogy, The Savage Grace. We were first introduced to Gabriel in The Dark Divine when Grace recieves a book of ancient letters that Gabriel (a young monk at the time) wrote to his sister during the Crusades, detailing his search to know more about the Urbat. The book of letters ends just before Gabriel falls to the Urbat curse, leaving us to wonder what happened to him in the following years to turn him into the man he is today.Most of Gabriel’s letters were written during the thirteenth century, and later translated and compiled by an Orthodox priest in the eighteenth century. For whatever reason, some of Gabriel’s letters were lost after translation and did not make it into that original book. But good news! A few of these “lost letters,” detailing Gabriel’s fall to the Urbat curse and his quest to seek revenge on the man responsible for his demise, have recently been “discovered” by the indomitable crew at Egmont USA, and are compiled here for your reading pleasure.I hope you enjoy The Lost Letters of Brother Gabriel. I think they give a lot more depth to Brother Gabriel’s character and the mythology of the Dark Divine trilogy.
Sounds amazing right?  Well Here's the link for more details!
Posted by Konstanz Silverbow at 9:56 AM