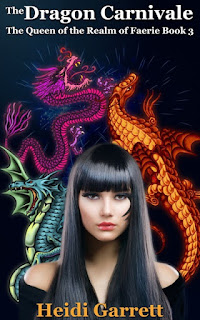 Why Do I Write Fantasy? or You Never Know Who Might Show Up at Your Front Door
By Heidi Garrett

As long as I can remember, I've been obsessed with the truths that my physical senses cannot explain: the mystical things occurring on this planet. Writing fantastical stories is my testament to these other layers of reality.

There are many ways of looking at our world. Imagine sitting at home, perhaps in your living room. There’s a knock on the door. When you open it, a funny little woman is standing there. She is about half your height, and a plaid crimson kerchief—knotted under her hooked chin—covers her head. Her dress is sack-like over her square body. She’s wearing an apron that could use a good ironing and she’s carrying a battered brown suitcase that’s almost as big as she is.

“As long as you’re staring, a glass of water would be nice,” she says.

Despite her gruff manner, you sense something mysterious about this stranger, and to be honest, you’re dying to know more about her. When she crosses the threshold of your home, a strong wind slams the door behind her. You both jump. There hasn’t been a breeze all day. In fact, it’s sweltering and heat waves have been rising from the melting pavement for weeks.

When you offer it, she almost grabs the glass from your hand, and you can’t stop your staring—even though you know it’s rude—as she drinks in noisy gulps.

“What? You've never seen a spring faerie before?” she asks.

Before you can answer, she wipes her mouth with the back of her hand. “Guess not, there aren't many of us left. And I haven’t been to the Mortal World, since…” She stops. Her deeply etched face softens. Something like sorrow pools in her dark brown eyes. She waves her hand. “That’s not what I’m here to talk about.”

Your heart tugs. You want to pull her from that sad place. “What’s in your suitcase?”

She points to the table. “I’ll show you.”

The suitcase is filled with eyeglasses. There are so many. Some have square black frames, others have round wire frames; there are a few speckled frames with octagonal lenses. You spy a pair of purple ones.

She shoves a pair of thick black glasses into your hand. “Put these on. Tell me what you see.”

With the eyeglasses settled on the bridge of your nose, you can’t see anything but yourself. You blink. You can see your hands and feet, your legs and toes. But the spring faerie—if that’s really what she is—is just a blur. You pull them off. She trades them for a pair of wire rims. With these glasses you can see her and your home.

She nods and looks away with that whiff of sadness.

Again, there is something about her that pulls at your heart. You think of the miracle of spring after a long hard winter, and that she shouldn't be sad—if she really is a spring faerie.

She smoothes the wrinkles in her apron. “Not all faeries do.”

She almost jerks the wire-rim spectacles from your nose. You reach for that purple pair. She doesn't stop you. Now, you can see down the street; your eyes travel the highway. Your view elevates, as if you are a bird. Soon you see the entire city you live in. With each pair of glasses, you see the bigger world.

When Flora tucks the temple arms of a pair of red frames behind your ears, perspective zooms around you. It’s like the lens pulls you into outer space, and you can see the entire world and all the billions of people who live on Earth.

Your heart flutters in your chest; it’s a lot to take in.

“Now—” Flora hands you a pair of fuchsia glasses with tiny rhinestones embedded in the frames. “Try on these.”

When you put them on, you’re able to see beyond the physical entirety of the world into the things that you've always known exist, but since you can’t see, touch, smell, or hear them, sometimes you've doubted. But you’ll never doubt again, because now— with these special glasses—you can actually see the bonds of love that death can never sever, the strings of fate that wrap the brown paper package of all our lives with twine, the tide of time that alters us, even as we never change...

But most importantly, you've seen that you belong here, on this planet. And you know— without a shadow of a doubt—that everything fits. Including you.

“I don’t ever want to take these glasses off,” you say.

The Queen of the Realm of Faerie is a fairy tale fantasy series that bridges the Mortal and Enchanted worlds. The main character, Melia, is an eighteen-year-old half- faerie, half-mortal. She lives in Illialei, a country in the Enchanted World, with her two sisters and their mother. Melia’s father has been exiled to the Mortal World, and her best friend is a pixie.

When the story opens in the first book, Melia is troubled by her dark moon visions, gossip she overhears about her parents at the local market, and the trauma of living among full-blooded faeries with wings—she doesn't have any.

As the series unfolds, the historic and mystical forces that shape Melia’s life are revealed. Each step of her journey—to find the place where she belongs—alters her perceptions about herself, deepens her relationships with others, and enlarges her world view.

In The Dragon Carnivale, book 3 of The Queen of the Realm of Faerie, energies in the Enchanted World are shifting and new alliances are forming; the Battle of Dark and Light has begun. Melia is desperate to make things right with Ryder, the young priest from Idonne, but first she must warn the half-bloods in the Mortal World that Umbra is coming for them, and face the powerful Dragonwitch and her spectacular Dragon Carnivale.

The first two books in the series: Nandana’s Mark and The Flower of Isbelline are currently available at Amazon, Barnes & Noble, iBooks, Kobo, and Smashwords. Nandana’s Mark is free.

Sign-up for Heidi Garrett’s new release email List and receive a lavender and gold Half- Faerie bracelet while supplies last…because you’re half faerie, too, right? 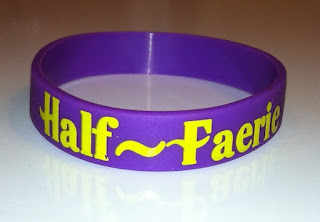 Heidi Garrett is the author of The Queen of the Realm of Faerie series. Her personal message to all her readers is: Once upon a time, you lived in an enchanted world, too… There is magic in all our lives; sometimes we need to look through different eyes to see it. The Queen of the Realm of Faerie includes many strong female characters within an intricate fantasy land. It is also a fairy tale fantasy.

The first book, Nandana’s Mark, is one of those free ebooks; the second book, The Flower of Isbelline, is now available; and the third book, The Dragon Carnivale, will be released in June 2013.

The series was inspired by the 15th century French fairy tale, Melusine. Heidi's hope is that when you read her books, you will rediscover the enchantment in your own life.

She currently resides in eastern Washington with her husband and their two cats. So far, she loves the snow. Being from the South, she finds it magical.

Learn more about Heidi and enjoy her stream-of-consciousness reading journal,

If you want to say hello, give her a shout out on Twitter at @heidigwrites or on