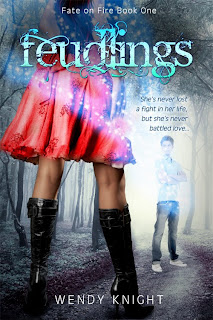 Nothing makes a new school suck worse than discovering the guy you’re in love with is your prophesied nemesis.Ari is the most powerful flame-throwing sorceress ever, and her people’s last hope in an ancient war. But she’s also a seventeen-year-old girl, and in her free, not-hunting-nemesis times, she jumps from school to school, trying to figure out regular people her own age and pretending she’ll get the chance to graduate.Shane lives a double life. He goes to school and masters the art of popularity, hiding the fact that he has a fate with a slim chance of his survival. He’s destined to end a 300 year-old war by killing or being killed. He knows he’s hunted by a powerful enemy who’s not afraid to die. Only problem? He has no idea who that enemy is. When Ari shows up at Shane’s school, angry and sullen and determined to keep him at arm’s reach, neither of them realize they are supposed to be killing each other, not fall-ing in love. Until Ari does realize it, and she almost dies – by Shane’s hand.

If you know anything about me (aside for my love of dragons),then you know I HATE cliche. And this book is anything but. It is also a fantastic read! This has got to be one of the most romantic, hilarious books I have ever read. I have never read a book so hilarious yet serious while being romantic and keeping up with serious tension!

I do not have an e-reader. I don't want one. But there was no way I was waiting to see if this book went *print before I read it so I purchased an e-copy and read it on my computer in one sitting.

And it was worth every second. I LOVE all of the characters, I love the interaction, the relationships, the fact that everything felt real.

Ari has got to be one of my all time favorite kick-butt female characters!

Hands down, no questions asked, Feudlings is one of my all-time favorite reads! And definitely in my top five favorite picks for the year!

*Feudlings has in fact gone to print and is now available in paperback on Amazon! *Does happy dance*