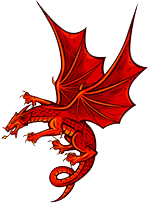 “They said alliances are needed but to remember that not all who claim to be our allies really are.” Rose replied.

Pyre cut in right after Rose stopped talking. “They also hinted that we have an enemy in the horde.”

Oceanus’ eyes shot open as large and round as discs. “What?!” Rose shot a glare at Pyre. “Pyre!”
“He needed to know Rose!” Pyre shot back in defense.

“I know he did and I was going to tell him. Just not like this. I wanted to speak more with them on this before bringing it up.” Rose said softly, wondering if her words made any sense to them. From the way they were looking at her, she would guess not.

“I mean. What if they’re wrong? It’s possible, you know they’ve been wrong before!” Rose said desperately as Oceanus growled.

Pyre spoke up, voicing Oceanus’ exact thoughts. “They’ve never been wrong Rose. Not once! Maybe you’re the enemy they spoke about.”

“They have been wrong! I only tell you what’s important to the horde! I don’t tell you everything they tell me!” Rose said as her own anger began to build. She was really getting fed up with everyone automatically assuming things concerning her.

Pyre shoved her. His heart cried out as he reverted to his once natural treatment of the dragon he only minutes before had considered his friend. “What have they lied about then Rose?”

Losing the current, she spiraled toward Caprae. She caught a new current right before she would have slammed quite ungracefully into the ground. “They said someone would love me for me! They said I wouldn’t be an outcast once we found Caprae. And for a little while I thought maybe they were right about that, too. But they weren’t, they were wrong!” She turned and flew off refusing to let the two males see her cry.

“Rose, wait!” Pyre called out trying to fly after her. As her form turned into a spec on the horizon, he stopped with a sigh and hung his head. “I’m sorry…” He muttered as he silently cursed himself for his stupidity.