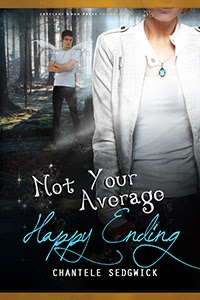 NOT YOUR AVERAGE HAPPY ENDING
YA Contemporary Fantasy
Release Date: March 3, 2014
Crescent Moon Press
When Ash Summerland left the Academy of Magical Beings, he was sure he’d put his troubles behind him. But when his girlfriend, Kendall, is almost killed by an old enemy over something he knows little about, Ash is forced to confront the demons of his past if he wants to save his and Kendall’s future.
With his fairy magic fading and his djinn magic more powerful than ever, Ash isn’t sure he can stop the evil from closing in around him. Although Kendall is the only thing keeping him from going over the edge, if he can’t learn to balance out his magic and find a way to defeat his enemies once and for all, both his world, and the girl he loves will be lost forever.

Follow the author and learn more about her books on her BLOG!

Posted by Konstanz Silverbow at 9:00 AM