Please introduce yourself:
Hi. My name is Karen Hoover, and I’m a book addict. I just can’t get enough. I read them, write them, sleep with them, eat them—wait, not that last part. Blech. Anyway, I’m a reader turned writer and have been doing one or the other since I was four.

How did you get into writing?
Well, seriously, it started with reading. My father loved books and used to let me sit on his lap while he read to me for hours. He swore he’d have me reading by the time I was four, and pretty much succeeded. When I was twelve I read a book by Gordon Korman that he wrote when he was twelve and that was the first time I realized that writing wasn’t just a dream—it was something I could actually do. I think that’s when it first started on the writing end and I’ve been writing in some form or another ever since.

When did you start writing?
I started writing for fun in second grade, making little books for my mom, but didn’t get really serious about writing until I was about twenty-four. I had a dream when I was twenty-two that just wouldn’t leave. It was so vivid and real, and I just had to write it. I spent the next seventeen years writing and re-writing the book that eventually became The Sapphire Flute.

When you first started writing, who in your life was the most supportive and helpful?
My mother, hands down. She told me I could do anything if I wanted it bad enough, and I believed her. Second to her was a friend of hers by the name of Darla Isackson, who was once an editor for Covenant (I think), and now writes for Meridian Magazine and has her own book out. Anyway, after reading some of my poems and stories, she told me that the only way I wouldn’t get published was if I quit writing. That was a huge confidence booster.

What has inspired your stories?
Dreams. Watching people. Daydreaming. Wondering “what if?” Other stories. Movies. Specific pieces of Jewelry. Walking. Driving. A lot of things.

What Hidden Talents have you discovered through writing?
That I’m a poet at heart. Even my novels come out poetic. Also, that I’m good with dialogue. I have found that it is easy for me to understand people because I can imagine what it would be like to live in their shoes. That’s made it a lot easier to be empathetic and tolerant toward others.

What do you think makes a good story?
Interesting characters, first of all, and they need to have a purpose and get into lots of trouble. :D

What is the hardest part of the writing process for you?
Parking my rear in the chair and just getting started. Once I start the words flow and I can write five thousand or ten thousand words without batting an eye. It’s just getting into the chair, putting my hands on the keyboard, and starting that’s hard.

If you had to start over and write the first book again, what would you change?
Well, I did that about ten times with The Sapphire Flute, so I pretty much changed everything I felt needed changing.


Which came first, the character or the story line?
ALWAYS the characters. I’m a people person and consider myself a character writer. Once I know who the players are, it’s easy to know what they would do in given situations and they tend to find their own way in and out of trouble.

How do you deal with Writers Block?
Oh, that’s a hard one. Well, I pray. A lot. I go up the canyons and sit in nature for a while, especially around trees. They inspire me. Sometimes I’ll write up there. I read inspirational quotes. I write what I call “Ramblings” and just pour myself out on the page, writing by hand, until I figure out what has me stuck. Sometimes it only takes a couple of paragraphs and sometimes it takes ten pages, but eventually I figure it out.

Are any of your characters based on real people?
YES!!! I actually have based several characters in my second book (The Armor of Light) on real people and plan to continue doing so in the series. It’s just plain fun!

Are any of the places (buildings, towns, pieces of art of jewelry) based on something real?
One of my books (unpublished) called The Misadventures of a Teenage Wizard, is completely based on real places. He lives in my old house, his grandma lives in my grandma’s house, he goes to my old junior high, and the neighbor’s farm is described just like our neighbor’s was.

What advice can you give to amateur authors such as myself?
Don’t give up! Go to writing conferences, join writing clubs, read, and learn as much about writing as you can. And don’t be afraid to talk to other authors when you get the chance. Also, don’t be afraid to play tricks on yourself when you’re stuck. One of my favorites is to change the background color of my word document to black and write with a bright color. Why? Because no matter how hard I try, I can’t type enough letters to fill a white page with black letters, but when I type with a black background, the letters are like light shining from the darkness. It’s beautiful.

I’ll just end with one of my favorite inspirational quotes. “God has plans for your writing. And believe me, they’re better than any plans you have for yourself. Let Him be in charge, and let Him delight you with what He has in store.” –Virginia Smith, author of Just as I am


Thanks Karen, for visiting my blog!


And now a sneak peak into her second book in the Wolfchild saga "Armor of Light" releasing on September 6th!


THE ARMOR OF LIGHT 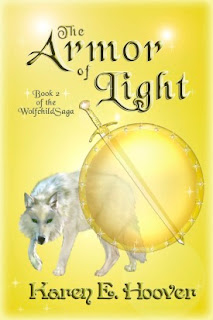 "The Armor of Light continues the stories of the three women whose stories began in The Sapphire Flute. Ember has been accepted into the mage academy, but not without cost. She has gained a new enemy, ancient and dark, and their entire purpose is to destroy her and all white magic with her. After nearly losing her life in a brutal attack, DeMunth is assigned her guardian and the keystone he wears, The Armor of Light, begins the transition that will make it a true power in protecting her from her enemies. As Ember struggles to understand the magic that no one can teach her, her greatest fear is that she will lose herself to the magic, or to the pull she feels toward her guardian.

Kayla has lost most everything of importance to her—the people, the prestige, and all that she has fought for the past ten years. As she journeys back to Dragonmeer, the home of her fiancee, she discovers the consequence of her choices, and begins a journey that will take her to strange, foreign, and often dangerous places, as she continues to search out the birthplace of The Sapphire Flute and the wolfchild she believes to be its player.
C'Tan continues her quest to recover the keystones that root magic to the land, both because her master, the guardian S'Kotos, demands it of her, but also to find a way to free herself from his power. The story is full of magic, betrayal, hope, and love—and finally the two girls meet in the midst of a battle of epic proportions. The elements of the universe are coming together and none can know who will stand in the end."
Hurry and check out these deals on Karen's blog!! And stay tuned for a giveaway!