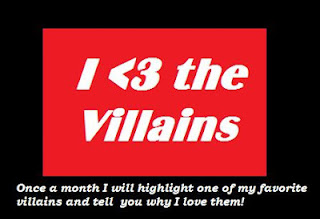 Well I have, and I am going to tell you why.  Loki- Thor's brother is a true, dark hearted villain.  He tries to kill the Avengers, he hates his brother (who he disowns as his brother) and he tries to take over the world.

So why do I love him?

Reason #1:  He has class.  He isn't some bum off the street who thinks he can just take over.  He actually has a plan.  And he truly believes in himself.  (Most heroes don't have that quality.)

Reason #2:  He knows what he is doing.  He doesn't just walk in and start shooting people.  He doesn't just kill everyone in sight.  He has got a plan.  In the opening scene for Avengers, you see him kill some people but he carefully selects three people and takes control of them because he knows they will be useful!

Reason #3:  He's got a killer smile.  Yes, I'm serious.  When he smiles you know two things. A. He's evil and B. He thinks he is about to win.   (And Tom Hiddleston has a gorgeous smile.)

Reason #3:  Some of the things he says is just hilarious!  Oh yeah, and he has some awesome facial expressions.   Like uh. . . when the Hulk pounds him into the floor?  Yeah I about peed cause I was laughing so hard.  (Did you know he actually moans in that seen?  I didn't hear it the first 4 times I saw the movie because everyone was laughing so hard.)

Reason #4:   He gets the job done. During one of the fight scenes between Loki and Thor, they couldn't get it to look right while filming so Tom just told Chris to hit him.  For real.  There was no way a real hit could look fake and they needed to finish the scene.  So, Chris hit him.  (Yeah Tom said he was sore after that.)

But if you asked me who my favorite Avenger is, my answer is Captain America.  (See, I'm not totally crazy!  I still like the good guys!)

Oh and my favorite scene with Loki?  The part in Germany.  I love how he walks down the steps totally full of himself, confident.  I love how he just flips over his scepter like it's another day at work, and hits the guy upside the head with it.   (I don't like the whole hitting part but the way he does it is just amazing).

Just in that small scene you see that Loki believes he has everything and that no one is his equal.

So why do I love Loki?  Because I love a great villain!  Without an interesting villain,  there is no reason to vote for the heroes.

Side Note:  Once a month starting now, I will be spot lighting a favorite villain.   Loki came first because Avengers is currently my favorite movie.  I've seen it in Theaters six times now.   Besides, hardly anyone realizes that I am a comic nerd.   Like, as in I know all about the original stories and how they all connect and the purple dude in the end of the Avengers movie?  His name is Thanos.  (Most don't know that.)

One more thing:  Did you know that if you are an author you are a Thor as well?  AuThor!!  See?!?! Authors are heroes who wear Mother's drapes.