How I wrote an entire book in 15 days!

On February 20th I (along with my wonderful friend C Michelle Jefferies) realized we both had the same goal date for our various writing projects.  I had decided that day that I was going to write my second novel in 100 days.  (Starting February 20th, finishing on June 1st) and that was that. We created the group 'The 100 Project' and so it began . . . .

Not long after (about two days I think it was) my bestest friend Lizzy declared a writing race.  And so my fingers went flying, and my word count jumped.  And I realized, I could have the book done so much faster than June 1st.

On March 3rd, the true battle began.  It started with a poem I posted on Facebook.  *WARNING* Though it may seem we hate each other, these were all written with a laugh and are not intended to hurt anyone. We were both laughing the entire time.  Also just so there is no confusion, if I won, Lizzy is buying me a journal. If Lizzy wins, I have to take her to Olive Garden.  (And while some find the price difference between those prizes unfair, we don't. It is what we each wanted.)


Right about now there were a few more but honestly, I lost track of them all. But no worries, you get the picture.

But as I said before, I knew I would win, not a doubt in my mind (Okay yeah that's a huge lie! I was so worried that she was going to beat me and all these poems would be so embarrassing  . .well they still are but not for the same reasons).

And on March 6th I posted this poem, a victory poem with my victory picture!


Yeah that's right! Lizzy is getting me a journal! But don't get me wrong. I was honestly worried that Lizzy was gonna kick my butt, humiliate me, and still make me take her to Olive Garden.  (Don't tell her but I'm still planning on taking her to Olive Garden.)

Oh yeah, and my goal now is to have the book written, revised, edited, polished, perfected, and ready for submission by June 1st.

And THAT is how I wrote a book in fifteen days!
With my bestie pushing me, racing me, and making it a competition.

Oh yes, and here is a picture of my victory journal! 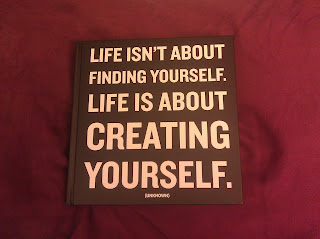