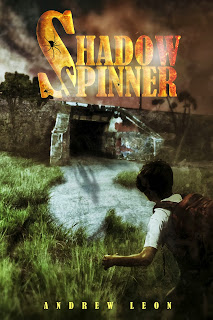 Tiberius has always thought of himself as a normal 10-year-old boy. Maybe he's a little smarter than everyone else, but that's still normal. He's scared of shadows, but everyone's scared of something, right? His mother's completely paranoid and called the cops the one time, just one time, he went over to a friend's house after school, but, still, he's normal even if his mother is not. At least, that's what he thinks until the day his mother finally decides to tell him about his father, and she tells him things that convince him that one of them is crazy, and he's pretty sure it's not him.That is until the Man with No Eyes shows up and his father falls out of the sky.

What inspired me to write Shadow Spinner?

That's actually a convoluted question. Initially, I just wanted to write a story about a kid dealing with a common-type fear. Tib is scared of shadows, which isn't actually common, but I wanted it to have a unique spin and not just be "scared of the dark." Then, I needed to write a different short story for a writing group I was involved with at the time, so I wrote a story, because Tib was on my mind, about Tib's mother. As it turned out, Tib's mother ended up being a character from a then unfinished story from several years prior, "The Evil That Men Do." That took Tib off in a completely different direction than just being a boy scared of shadows. Around the same time, I started teaching a creative writing class at my kids' school, so I thought I would write more short stories about Tib to go along with the assignments that I was giving the kids to show them, "hey, I'm doing these, too." It grew into the book from that, and Spinner is dedicated to that group of kids.

What is my favorite part of writing?

Well... not the editing, that's for sure. Having done it? No, that's not it, either, although I do really like it when I have a completed project in front of me. I guess just the doing of it. Working out the story. Pounding it into shape. And, sometimes, that's what it feels like I'm doing, pounding it into shape.

Which character from one of my own books would I be?

Man, I don't even know. See, I know what's coming up for all of the characters that I'm working on, right now, and I don't think there is a single one of them I would choose to step into.

Hmm... I really don't know. Nothing is coming to mind at all, and I don't really listen to the kind of music that most people would probably associate with the kind of story that Spinner is. Maybe, though, "The Devil Went Down To Georgia," which might seem like an odd choice, but, if you read the whole book, I think it makes sense.