If only a pile of wayward curls and the inability to stay on her feet were seventeen year-old Foster Kelly’s most pressing concerns. Unfortunately, stubborn hair and clumsiness are just the tip of it. At the age of five when Foster is told, “You don’t belong here,” it was only a mistake, but the result is one broken heart. These four carelessly spoken words have shaped and shadowed Foster, and now—a senior at Shorecliffs High-school—she seeks the wallflower’s existence, denying herself the most casual of friendships, much too afraid that someone will see what she believes is certain: she does not belong anywhere—or with anyone. This reality would continue to suit her just fine; however . . . Love has a long-standing history of undoing broken hearts.Like a comet, an unexpected arrival knocks Foster out of the crowded, starry sky, sending her directly into the limelight. Exposed and afraid, she will attempt to regain anonymity; but it isn’t so easy now that someone is watching. He pursues this shy enigma, confronting Foster’s deepest fears head-on, and in the process falls wholly and completely in love with her. But there is something he is not saying . . . a secret capable of certain ruin. Either he will break her heart once and for all, or he will heal it.In the end, though, it is Foster who must decide if she is worth mending. 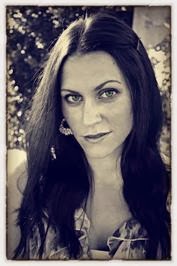 CARA ROSALIE OLSEN resides in sunny Southern California, where she lives with her very patient husband, Michael, and their spoiled pooch, Annabella. A product of a relatively normal childhood - whatever that means - Olsen recalls "Life had this relentlessly boorish way of reminding me I was wonky and unapproved. Regardless of status or gene pool, there is nothing simple or easy about growing up. Life doesn't play favorites or carry biases; it's the pits for everyone. But rather than constantly falling into the pit, often I chose to climb down willingly, lining the bottom with a soft place to land. That place is where I became a reader, and today, a writer."

Throughout high school Olsen struggled with subjects Math and Science, but excelled at the arts, written and performed, often finding a kindred spirit in those teaching Creative Writing and English Literature. What began with an ardency for language soon developed into a burgeoning desire to create. This yearning took shape in the form of poetry and short story fiction, both of which have been featured in print and online publications. Olsen's debut novel, Awakening Foster Kelly is the result of a four-year project born on a whim and sustained by its characters' tenacity and their refusal to give the author a minute to herself. "In the beginning, getting them to talk was like trying to light a wet match. So, we had several long, sometimes combative conversations. I told them that unless they started holding up their end of the deal, I would have no choice but to fill in the blanks with whatever scraps came to mind. It wasn't very long before I started showing up to find that everyone was already seated and waiting for me. We talked. I drank coffee. It was bliss."

These days Olsen considers herself incredibly blessed to be able to do what she loves most. However . . . if she wasn’t a full-time writer, she would have liked to join the cast of Saturday Night Live, or, taken over as CEO of Willy Wonka’s Chocolate Factory.

Awakening Foster Kelly . . . never before have I been so utterly confused by a book. But don’t let that scare you away. Hear me out. You see, I didn't truly know what to expect of this book. I thought I might be getting one thing and instead I got another thing entirely.

Many scenes had me so enthralled I couldn't put the book down. And other parts had me shaking my head, confused as to what happened and why the scene changed so suddenly. It was a constant battle – do I continue reading or do I give up and mark the book off as a DNF?

Alas, let me tell you how completely entranced I was by this book by the end. There was so much detail and sometimes that was actually a bad thing – at least in the moment. I truly was confused for large sections of the book but just as I was about to give up, something exciting would happen. And by the end of the book? Everything just fell into place - everything makes sense.

In many ways I connected with Foster. I understand where she was coming from and could see and even understand why she reacted the way she did. And that kept me reading even when I wanted to give up on this book. Something small that would pique my interest a little more. So I continued. And wow! What a journey. All the detail? The crazy journey this book takes you on? Well I would deem it very worth it by the end of the book. Without spoilers, let me warn you: You might very hate the ending. But then again, you might just love it.

At first I was hurt by the turn of events. So completely taken aback by what I was reading – terrified that one chapter could have ruined the entire story for me. But by the time I reached the last page I realized this very well may be one of the best books I've ever read.

This book most definitely is not for everyone. And in fact, if you are looking for a light read with a cute love story with a predictable happily ever after, don’t read this book. But if you’re up for an adventure, a challenge, if you’re up for something completely, utterly, crazily different in the worst and best way possible, read Awakening Foster Kelly.

A HUGE thank you to Cara for asking me to read and review this book. If not for that request, I wouldn't have ever enjoyed the epicness of this book!

And I assure you that receiving a free copy of the book in trade for a review did not in anyway change my opinions on this book. In fact, I love it so much I am now purchasing it in Paperback!

Posted by Konstanz Silverbow at 1:58 AM