Beyond Orion by Laura Bastian 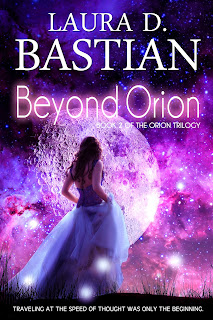 Amira traveled across the universe to avoid an arranged marriage only to find herself forced into another upon her return hours before her father’s death. As his only heir she should have ruled Rommader uncontested but discovers he's signed an unbreakable marriage contract and finds herself a new bride. While she might be forced to work with Marcus, she refuses to be his wife in any way other than name.

As they deal with assassination attempts, visiting dignitaries from other planets leveraging for political gain, and the discovery of unlimited teleportation, her feelings for her husband soften. Marcus proves himself a competent king and kind man, and her admiration for her husband grows stronger, but she refuses to allow herself to fall in love.

An unknown foe tries to steal the formula for unlimited travel, giving them the potential power to conquer the universe. Amira and Marcus must work together to stop the thief, but when King Marcus is abducted, Amira may be forced to choose between her husband and her crown.