Q is for (A) Question of Faith by Nicole Zoltack 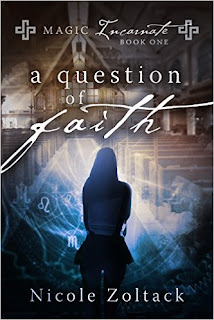 It's not everyday you learn you're the incarnation of magic.

After learning her birth mother sought the help of witches to conceive her, fifteen-year-old Crystal's previously unwavering faith is shaken. God hasn’t been answering her prayers like she thought--she was.

Crystal’s limitless magical potential is put to the test when her boyfriend’s mother is in a life-threatening accident. Surely God won’t mind her using magic to help people, but the miraculous outcome leaves Crystal wondering what she is capable of and worrying that her magic will damn her to Hell or, worse, prove she has no soul to condemn.

After her aunt is threatened, Crystal sets out to master her power, but flying and conjuring fireballs attracts dangerous attention. A witch hunter kidnaps her boyfriend, and shamans and witches hunt Crystal, desperate to use her to end a centuries-old war between the supernatural races. Her magic is an uncontrollable time bomb. If Crystal can't figure out what she's capable of, she won't just fail to protect those she loves and end the war--she might start the apocalypse. 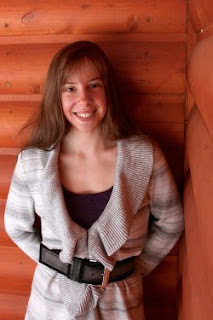 Nicole Zoltack loves to write in many genres, especially romance, whether fantasy, paranormal, or regency. She's also an editor for MuseItUp Publishing and works as a freelance editor.
When she's not writing about gentlemen and their ladies, knights, superheroes, or witches, she loves to spend time with her loving husband, three energetic young boys, and precious baby girl. She enjoys riding horses (pretending they're unicorns, of course!) and going to the PA Renaissance Faire, dressed in garb. She'll also read anything she can get her hands on. Her current favorite TV shows are The Walking Dead and Arrow.
To learn more about Nicole and her work, visit her blog at http://NicoleZoltack.blogspot.com. She can be found on most any social media site under Nicole Zoltack. Stalk away!

Email ThisBlogThis!Share to TwitterShare to FacebookShare to Pinterest
Labels: A Question of Faith, A to Z, Giveaway, Nicole Zoltack